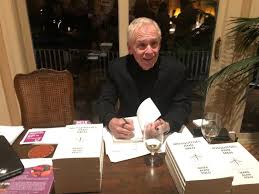 After a twenty-five-year absence, Faustus Madigan returns home to Greyhaven, a formerly illustrious 18th-century plantation in Peaceable, South Carolina, for a most unanticipated family reunion.
Titus, father to The Madigans, is dead.

Compelled to say goodbye to his father, visit with Addie-the woman who raised him-and mend the fences broken by his long absence, Faustus steps through the doors of the home he’d fled a quarter of a century ago.

Nothing can prepare Faustus for the changes that have occurred in his family members following his departure from Peaceable, so many years earlier. Nor can he foresee the monumental shift in the family dynamic that has occurred because of Titus’ death. During his brief visit, old acquaintances are rekindled, new bonds are formed, and long-buried family secrets are unearthed.

Faustus’ siblings, the heirs to Greyhaven, yearn to take hold of the reigns bequeathed them. They have plans of their own for Greyhaven’s future and are determined that no one-family or otherwise-will stand in their way.

There is always a price to pay for survival.

To buy Mark’s book, you can purchase it on Barnes & Noble.

Below is our interview with Mark Alan Polo

You’re a designer – how did you become an author? Nothing happens in a vacuum. Growing up, I always wrote when I couldn’t paint or sculpt. I majored in fine arts in college as a young adult, but found when I couldn’t take my supplies with me, writing traveled well. Creating stories filled the same problem solving adventures and emotional voids that painting, drawing or sculpting did, and, there was less to pack. But the biggest push for writing came many years later. I visited my brothers house on Frip Island in South Carolina. He invited me for a week and I had the house to myself. Driving there with only expectations of rest, water and isolation, I drove the road that linked the islands like a low twisting ribbon. The closer I got to Fripp Island, the more laden the tress became with moss and the wetter the roadway became, creating a low mist curing around my car. I passed a collection of shrimp boats. It was a shrimping company called Gay’s. Suddenly a story popped into my head …characters and place and time descended on me. Before I got to the house it was all I front of me. I started writing before I unpacked. I had to get it down. I was afraid I would forget what was swirling around in my head like the ephemeral fog that disappeared as soon as it appeared as I was driving. I wrote for a solid week. When I returned home, I researched coaching and found myself one. I remained with Deborah Emin for four years. Took a sabbatical from the story. Then when I and my husband Norm started our transition to The beaches in Delaware, he discovered another coach for me and I quickly joined. It was a great group of  people, talented, diverse, from many disciplines and locations across the country. I was blessed. I wrote continually. Wrote short stories, and continued with my novel that I started on Fripp Island. My stories were accepted and published with Dianne Pierce and David Yurkovich by Devil’s Part Press in five anthologies. And finally, my novel, Mosquitoes and Men, was accepted and published. I was awarded The Delaware Press Association, second place award for fiction writing for Mosquitoes and Men. I have since been granted a spot in The Delaware Arts Writing  Group for 2020, a week away with coaches and other talented writers, in November. I have also been interviewed on NPR for The Delaware Arts Program, on several radio programs through out Delaware and also have been on WBOC, Fox and CBS for my novel, Mosquitoes and Men. What I have discovered is that designing for these many years has giving me the ability to be detailed when it comes to location, scenes and characters. Designing helped me visualize each scene the way I see a room. When I enter a room, a film falls over it and I see it the way it should look for the client. I use this same ability in writing.

How Long have you been designing? I have been designing for forty years starting right after attending NY School of Interior Design.

How did you get into design? I went to Rutgers School of Art for several years, when my father had a serious talk with me. He begged me to turn my creative gifts into a consistent pay check. The thought of a starving artist son kept him up at night. I had always liked using my art talent to turn a room into livable art, so I entered NY School of Interior Design and never looked back.

What are you other interests? When we transitioned to Delaware beaches, my husband Norm and I started to renovate houses. Norm worked for many years for New York City, putting teams together, working finances to create Parks all around New York City. We did our first home and it was a success. We have since restored 12 varying types of homes, specializing on late 18th and 19th century renovations. We have recently embarked on a commercial venture and are currently installing a restaurant for an up and coming restaurateur couple, in one piece of our project that sits on the mouth of the Broadkill River in Milton DE. I love working on these renovations as not only do we get to financially benefit, but we are directly giving back to the town that we live by making it a better place to live with beautiful housing and places to visit, enjoy and dine. It has spurred on the town to pick up speed and others are also renovating. We have just been put on the National Historic Registry as a town. We are proud of this achievement

Where do you see yourself in a year? In a year, I will have finished and published my second novel, The Truth About Fish And Tea Cups, another contemporary southern gothic novel. I also continue to work in the tri-state area as an Interior Designer, and have some interesting projects slated for 2021.

Below is a gallery of some of Mark’s interiors