Home » Ladle of Love & Cafe of Love in Mount Kisco 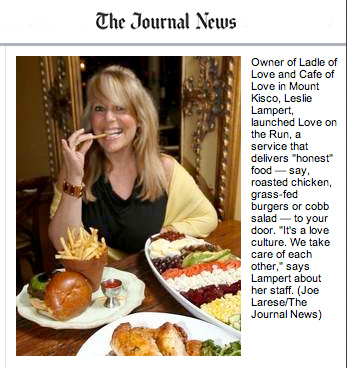 Ladle of Love, a farm-to-kitchen food shop in Mt. Kisco, New York started to simmer in the mind of Leslie Lampert during the tragedy of September 11, 2001. When Leslie was bringing soups to local firefighters in Millwood, New York, who were pressed into service at Ground Zero,she knew she was delivering nutritional sustenance. But she didn’t expect the overwhelming response from everyone who tasted her hearty, wholesome soups. At the same time, Leslie was also serving her soups to the families of two of her closest friends–both of whom were battling breast cancer and the word spread that Leslie’s Chicken & Dumpling, Mushroom Barley and Harvest Celebration were the perfect, delicious, soothing, savory meals. As Senior Editor of Ladies’ Home Journal Magazine for nearly ten years, Leslie produced and wrote the food features (in addition to other articles), spent many hours in the test kitchen helping to develop recipes, and appeared frequently on television as a lifestyle spokesperson for the magazine. During those years, Leslie also entertained often at her home in suburban New York, hosting scores of business dinners, family holidays and celebrations with friends. Leslie has been a “student of food” since studying abroad during college, reading cookbooks at night the way some people read John Grisham novels. In 1997, Leslie’s husband was diagnosed with cancer. In order to focus her attention on caring for him and her three small children, Leslie negotiated with Ladies’ Home Journal to work from home so she would have more flexibility to create a semblance of normalcy and impart a sense of stability to her family. During those months, Leslie found comfort in cooking for her family who, in turn, savored the robust soups and stews that represented both emotional and nutritional nourishment.

Aside from her personal challenges, Leslie also worried about the medical charities that were being short-changed in the wake of 9/11. As friends and members of the community began requesting Leslie’s curative creations for their own families, Leslie wondered if there was, perhaps, a business idea brewing–one that could provide needed additional income and an opportunity to donate a portion of the profits to charity. So she started out making soup gift baskets from her home (in between writing features for Ladies’ Home Journal, Parents, Time, Vegetarian Times and Avenue Magazines, to name a few), shipping them all over the country. Her goal: when weekly orders exceeded ten baskets, she would look for retail space. Within a few months, Leslie found the not-so-perfect, perfect storefront tucked in a little alleyway off the main drag in Mt. Kisco, NY. In 2003, Leslie launched the tiny (400-square foot) flagship store that is literally an open, Paris-style kitchen serving authentic, handmade soups, stews, salads and paninis for the “grab-and-go” customer. Two days before the opening, however, Leslie’s husband declared, unexpectedly, he was leaving the marriage. So… she took a few deep breaths and focused on getting the business up and running–securing the proper financing, hiring friends to pinch hit and negotiating credit accounts with food purveyors. Today, Ladle of Love is a thriving, award-winning, well-respected food shop that serves up gourmet take-out food, offers a full catering menu and, with the newly launched, Love On The Run, delivers Ladle’s honest food to loyal customers all over Westchester County. In 2008, Leslie opened Cafe of Love, an award-winning farm-to-table bistro featuring the freshest ingredients from local growers and farmers.In keeping with the original mission, Ladle of Love continues to support local charities and community efforts each month. Ladle of Love won “Best of Westchester” in its first year (and in subsequent years), and has been featured in numerous publications including The New York Times, Westchester Magazine, The Patent Trader, The Journal News, InTown Magazine, Bedford Magazine, Inside Chappaqua, Patch, The Bedford Record Review, Travel Savvy Magazine, among others. Ladle of Love won The Forbes Enterprise Award in 2006. Leslie was featured on the Oprah Winfrey Show in 2008. Tavern On The Green Featuring Ladle of Love Food Truck opened in October, 2010.